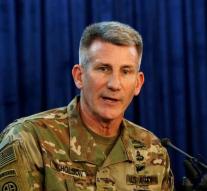 cabul - In the US Army's bombing of the Islamic State (IS) terrorist organization in Afghanistan, according to the US Army, four heads of IS have certainly been killed.

The attack took place last Thursday, but was only announced Sunday. The main victim of the attack is according to a spokesman of the army Abdul Rahman, the emir of Kunar province in the northeastern part of the country.

'The death of Rahman is the second blow that we hand over to the leadership of IS,' said General John Nicholson, the US military commander in Afghanistan. Nicholson further said that it's still the goal of 'completely eliminating completely by the end of this year. '