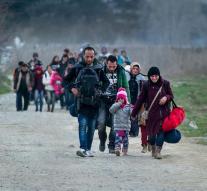 geneva - Terror movement Islamic State (IS) has about 3,000 Iraqis who were beaten captured fleeing and already executed twelve of them. That the UNHCR declared the UN refugee agency, Friday.

The fleeing villagers from the district Hawiga be taken according to the UNHCR Thursday when they were on their way to the city of Kirkuk.