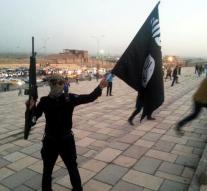 baghdad - Islamic State, a group of 58 conspirators executed that would have been planning the city of Mosul in northern Iraq play into the hands of Iraqi government forces. That, residents and employees of Iraqi security forces said.

The plot was discovered last week. The conspirators were slain by drowning and then buried in a vacant lot on the city's outskirts. A local staff member of IS leader Abu Bakr al-Baghdadi was in charge of them, according to statements by five people, IS-expert Hisham al-Hashimi and a colonel of military intelligence in the Nineveh province.

Iraqi government forces are about to launch an attack to retake Mosul IS on. The city, which previously had about two million inhabitants, was occupied by IS in 2014 and proclaimed capital of the Iraqi part of the caliphate.

According to Hashimi dissidents were arrested after one of them was caught with a message on his phone which spoke of an arms transfer. He confessed during interrogation that there are three places were weapons hidden that would be used in an uprising. IS rolled arms storerooms on 4 October on, said Hashimi.

According to Colonel Ahmed al-Taie IS has intelligence in Nineveh after the failed coup revoked the special identity cards of its local commanders in Mosul, in order to prevent their escape with their families. According to residents IS has placed throughout the city trap bombs and dug tunnels. Children also would be used to spy.