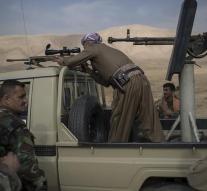 baghdad - Warriors Islamic State have with the crucifixion of five people a clear message to the Iraqi city of Mosul delivered to the 1.5 million people who are still trapped. The five would have passed information to the enemy. Although the terrorist movement is losing ground to the east of the city, the warriors make clear that they are still the boss.

According to people in the town it is quieter than in recent days. 'I saw warriors IS check the beards of men and search for smokers,' one of them said Tuesday by telephone.