Home / World / IS conquers part of Iraqi town of Rutba 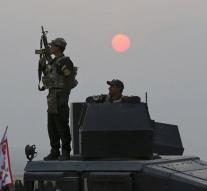 baghdad - Units of the Islamic State have taken Tuesday parts of the Iraqi city of Rutba. The attack on the remote western town was started two days ago. The action is intended to somewhat ease the military pressure on Mosul.

The attack on the northern Mosul, the last major stronghold IS in Iraq has now lasted eight days, and the force of Iraqi and Kurdish troops approaching the town steadily.

Rutba is about 100 kilometers from both the Jordanian and Syrian borders. The city is now about half under the control of the terrorists. In the other half are Iraqi army units and fighters from Sunni tribes. The army carries reinforcements, so let it know.