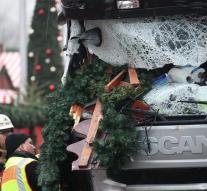 berlin - The terrorist group Islamic State has claimed responsibility for the attack on the Christmas market in Berlin.

In a statement issued through with IS affiliated news agency Aamaq is said that the attack was carried out by a soldier of the Caliphate, which gave effect to the call to citizens of countries which are part of the coalition led by the United States against IS, to attack.