Home / World / IS claims attack Las Vegas, but does not provide evidence 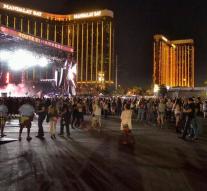 las vegas - The 64-year-old Stephen Paddock, who launched a massacre in Las Vegas on Sunday, would have acted on behalf of Islamic State. IS has recently claimed unjustified attacks. It is unclear how much value this new claim should be awarded.

The statement by Amaq, the press agency of IS, is in violation of all the information that the US police has been putting out to date. The local authorities are not explicitly concerned with a terrorist motive.

According to IS, Paddock converted himself to Islam a few months ago. Proof of this is not provided by the terrorist organization.

At the shooting party, there were certainly 50 deaths and 400 injured. In the hotel room of Paddock, from which he opened the fire, ten weapons were found.