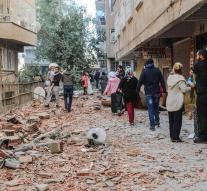 - Sunni extremists of the Islamic State (IS) have claimed responsibility for a bomb attack in the eastern Turkish city of Diyarbakir. They argue that through their new medium Amaq. When the attack with a car bomb fell Friday killing eight and fell over a hundred injured.

Turkish Prime Minister Binali Yildirim said that Kurdish extremists of the PKK were behind the attack. One of the perpetrators was slain and was probably a member of the Kurdistan Workers' Party (PKK), said Yildirim.