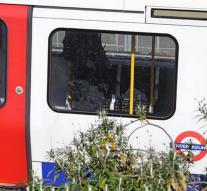 - Islamic State has claimed responsibility for the attack in the London subway. This happened as usual by the press office of the terrorist organization, Amaq.

Because of the explosion of a 'do-it-yourself bomb' in a plastic bag, several passengers were injured. The National Health Service (NHS) said Friday night had treated 29 victims. None of them was serious about it.