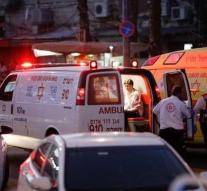 jerusalem - In Jerusalem, on Friday, a double attack, claiming Islamic state, killed an Israeli police officer and killed his three Palestinians. Steps and shootings took place in two places near Damascus Gate on the outskirts of the Old Town.

Two Palestinians opened the fire on a group of police officers and then pulled knives. Both were shot dead. A third Palestinian was shot in another place after he had stabbed a female police officer. The victim died and another agent got injured.

IS demanded the responsibility through the Amaq press office, which is linked to the terrorist group.