Home / World / IS advised truck as a weapon 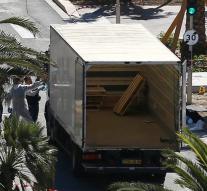 - Islamic State last month in a video on his followers advised to use a truck to drive a group of citizens.,, Fill your vehicles with fuel, 'sounds a voice-over in the chilly message.

The video message, according to the British newspaper The Times Ramadan sent to chatrooms during the Muslim fasting month used by jihadists. American experts, the newspaper more examples of such recommendations IS discovered. As a suicide attack in New York were, suggested an attack by a sniper in London and an attack with a wheel in Australia.