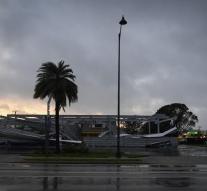 tampa - The devastating hurricane Irma was toned down to the category 1 on Monday above Florida. The still very heavy storm has wind speeds of up to 135 kilometers per hour. Irma draws across land northeast of Tampa to the north.

Local media reported in Florida that the water damage is gigantic, but Irma has caused less misery than feared beforehand. The hurricane did not go to the densely populated southeast coast on weekends and on the west coast, Irma also avoided Tampa, an agglomeration of nearly three million inhabitants.

However, the overall picture of damage and victims is still unclear in the region where the night has come.

The hurricane has caused massive devastation on the islands of the northern Caribbean Sea including Saint Maarten. There have been 24 deaths in this region since Wednesday.

Miami International Airport will be closed until Tuesday due to water damage. Fort Lauderdale Airport is also close to repairs on mondays.