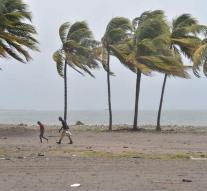 miami - Hurricane Irma loses power as his eye draws on the northwestern coast of Florida on monday. Irma is expected to slow down from a hurricane of category 1 to a tropical storm. By Tuesday afternoon there will be only tropical depression, says the American National Hurricane Center (NHC).

Irma began to be one of the most powerful hurricanes ever in the Atlantic Ocean, located 100 kilometers north of Tampa at maximum wind speeds of 120 kilometers per hour.

The center of Irma will go through Florida to southern Georgia and pull further toward Alabama on Monday and Tuesday, is the forecast.