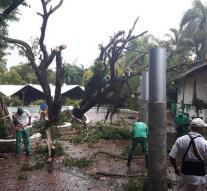 santo domingo - The storm damage on the Dominican Republic seems to fall on Thursday night. This is evidenced by reactions from Dutch tourists and hoteliers on the spot, after Hurricane Irma.

'Not comparable to Saint Maarten,' says Henri van der Aa, who runs a hotel on the north coast in Sosua, east of Puerto Plata.

He was warned to stay inside. 'We did that too. There was a strong wind and a lot of rain, but there is still not much going on here. We did not have to change us in the bathroom. '

Randy and Monica Joyful Willems are on a honeymoon in Punta Cana. 'We thought it would be worse. Just some rain and wind, 'says Monica.

Also, according to Danny Koreman (in Punta Cana), Kirsten Siviero (in Bayahibe) and Piet Schenkels (in Cabarete) there is little evil done by Irma. 'But the worst can still come. So far a big storm. Crots and small trees are blown over, but everything is still alive. Also power and telephone work just. '

According to these eyewitnesses, the hurricane may be slightly deflected to the north in the sea. 'That hurts a lot of misery on the coast,' they find.