Home / World / Irma also takes care of death in US 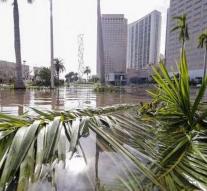 miami/atlanta - Hurricane Irma has caused at least nine deaths in the US states of Florida, Georgia and South Carolina. Irma is toned to a tropical storm over the US, but has caused damage to the state of Georgia above all. In the three states, over seven million people have no power.

According to the US transmitter ABC, in Florida, six deaths have fallen as a result of the storm. In Georgia, the authorities reported that there were two deaths. Later on Monday a dead was reported in South Carolina. A 57-year-old man died after being hit by a branch.

Previously, Irma in the Caribbean already had at least 37 deaths. In Cuba ten people died and in Haiti one victim had fallen due to the hurricane.

The NHC, the American National Hurricane Center, reported on Monday that Tuesday, Irma moved across southwest Georgia to Alabama. The hurricane has now been reduced to a tropical depression with wind speeds of 55 kilometers per hour, but still causes heavy rain showers.