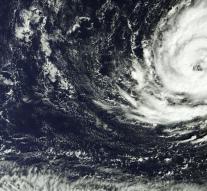 london - Ireland is scrapping for the remains of Hurricane Ophelia, which may turn out to be the heaviest storm it has hit since 1961. Ophelia is now another hurricane in the second lowest category 2 and Friday's 750km southwest of the Azores.

It is expected that Ophelia will reach the west of Ireland as a heavy storm on Monday. This can be accompanied by wind speeds of more than 140 kilometers per hour, according to the BBC.

It is a storm that follows a different course. Most people follow a path across the northern Atlantic. Ophelia, however, is from the southwest.