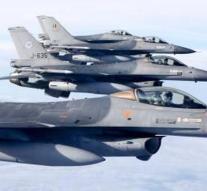 the hague - Two Iraqis who were affected by air attacks during their flight from the city of Mosul in 2015 want to know whether Dutch F-16s have been involved. In a letter sent by a letter sent by NRC Handelsblad on Thursday, their lawyer Liesbeth Zegveld asks clarification to Minister Jeanine Hennis of Defense.

The two victims who were injured were, according to the letter, on January 26, 2015, in a box of taxis traveling from Mosul to Baghdad, on the run for terrorist group IS. The cars were bombed up to two times.

Zegveld writes that the two attacks were probably carried out by members of the international coalition against IS. Which country is unclear. According to the lawyer, a weekly overview of operations of the Ministry of Defense shows that Dutch F-16s were active over Iraq in the conscious period. If they were not Dutch devices, they would like to know if Defense was involved in a different way.

The use of Dutch combat aircraft in the fight against IS is not widely known. Thus, it is unclear what dates they have performed and in which places. It is well known that the Public Prosecutor has run four investigations due to incidents involving potential civilian victims.

The Ministry of Defense announces that the letter of Zegveld has not yet been received and therefore no substantive response can be given. A spokeswoman says that reports of potential civilian victims are being investigated by Centcom headquarters. 'In case of possible Dutch involvement, Defense also conducts own research. In addition, the OM is informed of any weapon deployment by Dutch units. '