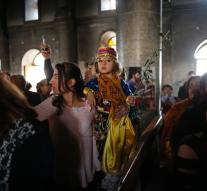 mosul - Hundreds of Christians in the unofficial Christian capital of Iraq for the first time celebrated Palm Sunday again in three years. Believers gathered Sunday in Qaraqosh in a church before fire was stabbed by Islamic State.

Qaraqosh applied to the advance of the terrorist organization as the largest Christian settlement in Iraq. Meanwhile, the place is a ghost town. While the jihadists were expelled, many former residents dare not return. IS delivers in nearby Mosul still battle with government troops.

Yet Sunday sounded the tolling of church bells in the city. Hundreds of people drove from Erbil to Qaraqosh to celebrate the Christian holiday. Believers then pulled under the watchful eye of armed soldiers through the town, while they held up a banner with the inscription 'in times of war we bring peace. '

Not all former residents of the city are optimistic about the future. '75 percent of the houses set on fire,' said a Christian man. 'So for people to live as they return?'