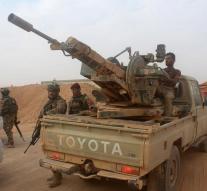 baghdad - The terrorist group of Islamic State is increasingly being pursued in Iraq. Military sources said Sunday against Iraqi state television that the Akashat-based Akashat-based area on the border with Syria has been re-established.

The Akashat area in western Iraq is rich in phosphate and uranium mines. Now that Akashat is in possession, hopes to enable the Iraqi army to succeed after the conquest of cities occupied by IS in the Euphrates Valley. Akashat is located a few kilometers from the border with Syria.

In Iraq, the terrorist organization has already lost a lot of land in recent months, including the Mosul bastion.