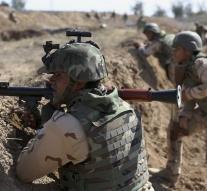 fallujah - In an air raid by the international coalition against Islamic State Nine Iraqi soldiers were killed. That the Iraqi Defence Minister, Khaled al-Obeidi, said Saturday.

The air forces of the coalition covered the advancing ground troops in Fallujah since the Iraqi army helicopters could not fly due to bad weather Obeidi said.

The attack was probably carried out by US warplanes, said US Secretary of Defense Ashton Carter. He has conveyed his condolences in a telephone conversation with Iraqi Prime Minister Haider al-Abadi.

He (Abadi) and I agreed that this incident both of us enormously sorry and that following an investigation, but such things happen when you are fighting shoulder to shoulder.

It is the first known time that are bombarded with the fight against the terror group accidentally allies.