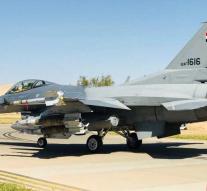 baghdad - Iraq has carried out air strikes on positions of Islamic State (IS) in Syria on Thursday. Prime Minister Haider al-Abadi said that action was taken because IS gangs pose a threat to Iraq.

Iraq has informed Syrian President Bashar al-Assad before it went into the air strikes. Iraq is supported by Western countries and nowadays also has a good relationship with Iran and Russia, two Assad allies.

In December, the Iraqi army reconquered the city of Mosul on IS and Baghdad declared that it had defeated the terrorist movement. From the border area of ​​Syria and Iraq, IS fighters still regularly carry out attacks in Iraq.