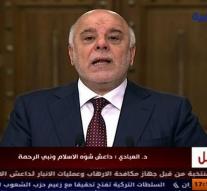 baghdad - The middle of the fight against Islamic State (IS) Iraqi Prime Minister Haider al-Abadi needs to find a new defense minister. A majority of the parliament on Thursday the current Minister Khaled al-Obeidi sent home, reported the Iraqi state.

Parliament has lost confidence in al-Obeidi. His name has surfaced in a corruption scandal involving arms shipments. The minister knew parliament recently though not to convince you that he is innocent. Obeidi is Sunni and is considered a confidant of the prime minister.