Home / World / Iraqi army takes in all the oil fields 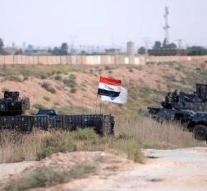 baghdad - The Iraqi army reports to have control of all oil fields in northern Iraq. The Kurdish warriors have withdrawn according to Iraqi and Kurdish officials.

Federal Iraqi troops and shiite militias reached the northern city of Kirkuk on Monday and stopped for the city. Thousands of civilians fled the city. Kirkuk counts an estimated 1.3 million inhabitants.

Kirkuk was occupied by the Peshmerga, the Kurdish army in 2014. This was capable of the disappearance of the Iraqi army during the rise of Islamic State. In Kirkuk, religious groups have traditionally lived in Sunni, Shiites and Christians. The population includes Kurds, Arabs, Turkmen and Arameans.