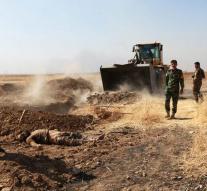 mosul - The Iraqi army is Saturday launched a major offensive to retake the town of Hamdaniyah on the terrorist group Islamic State (IS). Hamdaniyah located about 15 kilometers southeast of Mosul.

An Iraqi general told CNN that the military office of the mayor and the main hospital of Hamdaniyah already owned. He said that at least fifty fighters of IS are slain.

The Iraqi army and its allies started in the night from Sunday to Monday an offensive to retake Mosul on IS. The terrorist movement got the city in northern Iraq held in 2014.