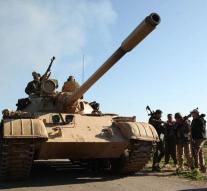 mosul - The Iraqi government army has made significant progress in the recapture of the western district of Mosul on Islamic State. The soldiers managed to take an important stronghold of the terrorists, a complex of government buildings.

They are large buildings which include the provincial government housed, reported a spokesman for the army along. The city of Mosul is owned by IS.

Mosul is the third largest city in Iraq and the main IS stronghold in the country. The town near the border with Turkey is divided by the Tigris River. The government army currently has two of the five bridges in hands, including the important Freedom Bridge. The eastern part of the city was occupied by the army after four months of conflict in January. In the west, home to an estimated 650 000 people.