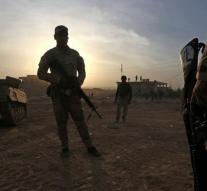 baghdad - The Iraqi army on Saturday after heavy fighting occupied two districts in the east of the city of Mosul. The special units had air support from the United States and their own air force.

The regular infantry and armored units at the same time conquered a neighboring district. The Iraqi military says thirty terrorists of the Islamic State have been killed in the fighting. Iraqi units are now more than a week in the east of the city, which is IS-owned since 2014. Mosul is the last major city that the terrorists are still in control.

Iraqi forces began backed by some Kurdish units in the offensive against Mosul on 17 October. Baghdad says there are 100. 000 soldiers participating in the march. That face ' several thousand 'of IS fighters. A major problem for the military is the fact that everywhere mines and car bombs were posted by IS. Moreover IS used by citizens they committed against the attackers as a human shield.

Mosul is folded around the Tigris River. The city has one and a half million inhabitants, who are the vast majority still in their homes. The United Nations and the International Organization for Migration estimate the number of refugees that left the city at about 49 000.