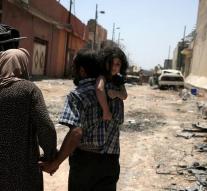 tikrit - Iraqi armed forces sacked an Islamic state offensive on the Sunni city of Shirqat, south of Mosul on Saturday. According to security officers, thirty soldiers and civilians were killed by the fighting, forty people were injured. Also, ten IS warriors were killed.

IS lost Shirqat last year to the government army, supported by the Americans, and local combat units. The fall of the city paved the way for the decisive attack on Mosul, the largest IS-stronghold in Iraq. Eight months later, large parts of the city were recycled. The terrorist organization only has an enclave on the western shore of the Tigris. In addition, there are resistance swords of IS south and west of Mosul and in the Syrian border region.