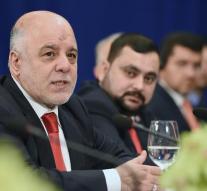 baghdad - Iraq gets to the United Nations Security Council to enforce the withdrawal of Turkish troops from the north of the country. Iraq's ambassador to the UN asked for a meeting to ask questions and there to make a final resolution 'violations and interference by Turkish side' to.

Iraq also annoyed by statements of the Turkish President Erdogan on the future of the northern Iraqi city of Mosul, which is still in the hands of the terrorist group Islamic State. After the liberation there were only Sunni Arabs, Turkmen and Sunni Kurds may live.

The Erdogan came to be strongly criticized by the Iraqi government dominated by Shiites. Iraqi Prime Minister al-Abadi warned that Turkey risks a regional war.

Turkey recently decided to extend the presence of Turkish troops in 2000 at a base north of the city of Mosul in a year. Turkish Prime Minister Yildirim said the Iraqi criticism 'incomprehensible. '