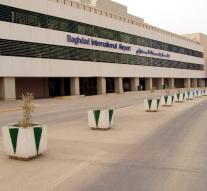 baghdad - Iraq decided Monday and Tuesday not to carry out civilian flights between Baghdad and the northern cities of Arbil and Sulaimaniya. The airspace is used by Russia to carry out bombings in neighboring Syria, reported the Iraqi aviation authority.

Russia performs the actions already a month. It is clear why the Iraqi authorities have now made ​​the decision to shut down air traffic.