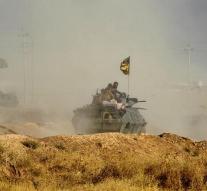 mosul - Iraq put 54,000 soldiers in the recapture of the northern city of Mosul on the terrorist group Islamic State (IS). That US Lt. Gen. Stephen Townsend told CNN said. He is commander of the international coalition against IS in Iraq and Syria.

Military sources expect the battle for Mosul last week. Iraqi Prime Minister Haider al-Abadi has announced that as the time for the government army and the national police to pull has arrived in Mosul, he only sends troops into the city.

Also Shiite militias and Sunni and Christian fighters are part of the led forces Iraq would liberate Mosul. Furthermore, do a total of some 4,000 Kurdish peshmerga part in the offensive.

According to US military sources, there are probably 5,000 IS fighters in Mosul. Sources around IS mention about 7,000 fighters.