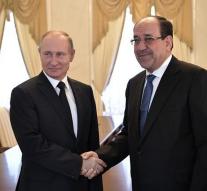 The Izvestia newspaper reported last week about an upcoming 'big' 'Iraqi order for the tanks used in the conflict in Syria. A Russian military analyst said it could handle several hundred tanks, amounting to over $ 1 billion.

Dmitri Sjoegaev, head of the Russian Federal Service for Military-Technical Cooperation, said at the request that the transaction had been discussed between Al-Maliki and Putin '.