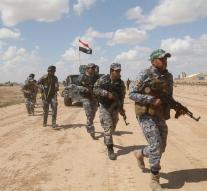 baghdad - Iraq has executed 36 jihadists who were convicted of involvement in a massacre in which hundreds were massacred in 2014, Army recruits. That Iraqi media reported Sunday.

The massacre was perpetrated by fighters from Islamic State. The former US Army base Camp Speicher near Tikrit, they killed more than 1,500 recruits from the Iraqi army. Most of the victims were Shiite Muslims.

On video images IS spread showed how large numbers of unarmed men were shot. A year later, mass graves were discovered.