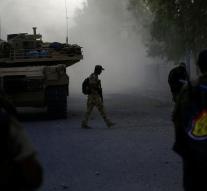 baghdad - In its own words, Iraq is about to recapture the Tal Afar city on Islamic state. The government army has penetrated into the city center and an old castle there.

According to Iraqi minister Ibrahim al-Jaafari (Foreign Affairs), 70 percent of the city is now in the hands of the government. 'And if Allah wills, the rest will soon be liberated,' he added. Al-Jaafari spoke at a press conference with French ministers Jean-Yves Le Drian (Foreign Affairs) and Florence Parly (Defense), who visited Iraq.

Iraq opened the attack on Tal Afar last week. The city is on the strategically important highway between Mosul and Syria. It was, with Raqqa, one of the few cities that were still in IS hands.