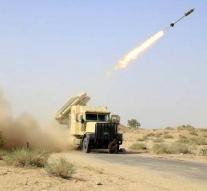 erbil - Iraq has started a bomb bombing on Tal Afar, a city west of Mosul still under control of Islamic State (IS) terrorist group. An attack with ground troops to take in the city will begin when the air campaign is over, said a spokesman for the Iraqi Ministry of Defense for television.

The Iraqi authorities have already announced that Tal Afar, 80 kilometers west of Mosul, is the next goal in the war against the Islamic militant group that took control of Iraq in parts of Iraq and Syria in 2014.

The self-proclaimed 'caliphate' of Islamic State suffered a major defeat last month when Iraqi troops with the help of the US regained the IS bolder Mosul after a nine-month siege.