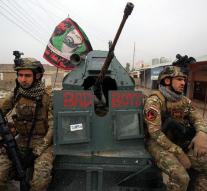 mosul - The Iraqi army on Thursday to a new phase began his offensive against the Islamic State group in the northern city of Mosul. Units try to penetrate deeper into some eastern districts where the advance was stalled for almost a month.

To take the offensive 100. 000 Iraqi soldiers, Kurdish peshmerga and Shiite militias share. It is the largest ground operation in Iraq since the American invasion in 2003. The troops from the air supported by a coalition led by the United States. On the ground, US advisors are also active.

To complicate the supply and regrouping of IS fighters the last remaining bridge was bombed Monday between eastern and western Mosul, although this would make more difficult the evacuation of civilians, according to the United Nations. In Mosul are an estimated 1.5 million people fixed.

Iraqi Prime Minister Haider al-Aabadi this week said it could take three months before IS is driven out of Mosul. Earlier, he said the city before the New Year would be recaptured.