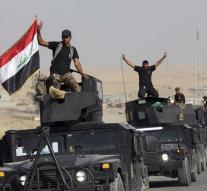 mosul - The Iraqi army has claimed the recapture of two districts in eastern Mosul. Fighters from Islamic State Saturday would be further driven back by elite troops.

Government forces were now back in charge in about half of the district on the eastern bank of the Tigris River, which runs through the city. The offensive in Mosul so far has been slow. The jihadists continue to carry out attacks against and warn out suicide attacks.

Residents and aid agencies fear that it will take months before the fighting in Mosul are behind. In the town are many solid citizens. A first attempt by the UN to hand out relief supplies, Thursday walked out of hand. Residents stormed as a distribution center.