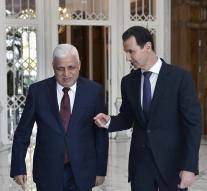 damascus - Neighbors Iraq and Syria talk about the possibility of collaborating their armed forces in the fight against the Islamic State terrorist group. An Iraqi envoy spokesman spoke in Damascus on Thursday with Syrian President Bashar al-Assad, reported the Syrian state press office SANA.

Assad and Iraqi national security adviser Faleh al-Fayad spoke about 'practical measures for military cooperation on both sides of the border. 'The Iraqi successes in the struggle in Mosul were the reason for the conversation.

The Iraqi Air Force has already taken action over Syria. There fighting fights are targets of IS, which has areas in both Syria and Iraq. Those air attacks were matched with Damascus.