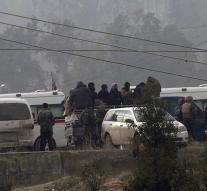 aleppo/beirut - A commander in the latter besieged stronghold of jihadists and rebels in Aleppo on Friday said that just outside the enclave 'Iranians' citizens imprison being evacuated.

The message from the enclave following reports that the evacuation of civilians and fighters from that part of Aleppo Friday shut down. With Iranians, the commander probably mean Shiite militias fighting for the Syrian government.

A Lebanese broadcaster Al-Deen Maya, meanwhile, reported that a convoy was on its way to northern Syrian villages are besieged by jihadists returning empty-handed. The convoy would go to al-Foua and Kefraya go in Idlib province. There are mainly Shia Syrians under siege. The convoy, according to al-Deen Maya hands of jihadists reversed.