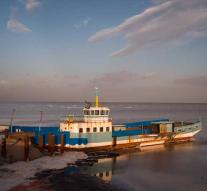 teheran - A remarkable statement from an Iranian general. At a press conference on Monday, Gholam Reza Jalali indicated that he thought that climate change in his country was 'suspect'. He accuses Israel of stealing snow and clouds.

'Israel makes sure that the clouds that enter Iran do not release rain,' said the general. 'In addition, we also deal with theft of snow and clouds. '

Jalali, one of the highest generals of Iran, based himself on findings from a scientific study.

The head of the Iranian meteorological institute immediately announced that it was not aware of the investigation. 'On the basis of meteorological knowledge, a country can not steal snow or clouds,' says Ahad Vazife. 'Iran has been suffering from drought for some time, but this is a global trend that not only Iran has to deal with. '