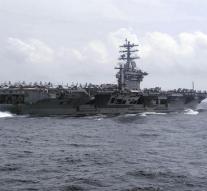 washington - In the Persian Gulf, there has once again been an incident between the Iranian and American forces. An unarmed Iranian drone flew along a US military officer on an aircraft carrier, which was about to land on USS Nimitz aircraft carrier.

The unmanned plane would be approached to the 31st meter, said the source on condition of anonymity. He called the incident 'unsafe and unprofessional' and labeled it as the thirteenth incident of this year. The Iranians would have ignored calls through the radio, asking them to keep away.