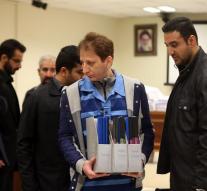 tehran - The Supreme Court in Iran on Saturday confirmed the death sentence against the well-known businessman Babak Zanjani. He has during the oil embargo against Iran billions of dollars in oil deals removed via a network of companies in countries including Turkey, Malaysia and Dubai.

According to Justice Zanjani, the government converted 2.5 billion euros guilty of evaded revenue. The case is controversial because it became clear last spring during treatment for a court ruled that the businessman was covered by several senior officials. President Rouhani is against capital punishment as it offers the opportunity disappears to expose and identify the embezzled money to the officials concerned.

The death penalty against two accomplices of Zanjani was rejected by the court.