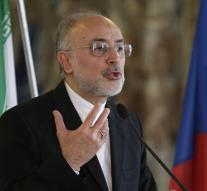 tehran - Iran is going to help Russia build a second nuclear power plant. The boss of the Iranian nuclear authority, Ali Akbar Salehi, announced that the construction starts next Saturday.

The construction of the plant will take about ten years and cost nearly nine billion euros. In the agreement that Iran with the West closed to phase out its nuclear program, state that the country may use nuclear energy for peaceful purposes.


In 2010, in the southern Iranian Bushehr nuclear power plant completed the first who was also from the ground up with the help of Russia. There are plans for another two plants.