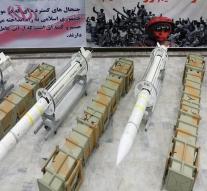 teheran - Iran has started the series production of new Sajad-3 airdrives. According to the Minister of Defense Hussein Dehghan, they have reached 120 kilometers and can reach a height of 27 kilometers. The weapons are intended to effectively combat attacks of fighter, helicopter and drones.

The United States has announced stricter sanctions against Iran this week, partly because of the controversial rocket launch program. However, Tehran always repeats that it is purely for air defense to defend its own limits. Other countries have nothing to fear, said Dehghan on the state television. For this legitimate right, Iran does not require foreign consent, nor of a United States force.