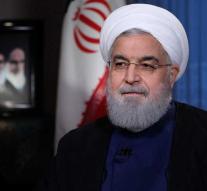 teheran - Iranian President Hassan Rouhani has rejected an invitation from his US counterpart Donald Trump to talk about a new nuclear deal.

This invitation came shortly after the US announced that the sanctions against Iran from before the 2015 nuclear agreement will resume. Washington has said that Iran can only prevent these sanctions by agreeing to negotiations on a new atomic agreement.

Rouhani said on Iranian television that there can be no talks, as long as Washington disowns the 2015 agreement '.

Trump said last week that he wants to talk to Iran in advance without any conditions. The US president stepped out of the nuclear agreement in May, which had been signed with Tehran under his predecessor Barack Obama.

The EU has asked Trump several times in vain to keep the original agreement intact.