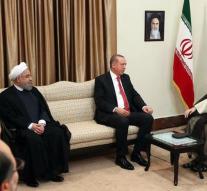 Both Iran and Turkey are afraid that the Kurds in the country take an example of their relatives in Iraq. Who recently voted in a referendum for total independence from Baghdad. Khamenei called that decision on TV betrayal for the whole region. According to him, it would mean the establishment of a second Israel in the Middle East.

Khamenei warned that the Americans and their allies spun yarn at the result of the popular consultation in Iraqi Kurdistan.

Israel denies any interference with a referendum but welcomes the outcome. The US was opposed to the poll because it caused destabilization at a time when all parties were still very busy with the fight against Islamic state.