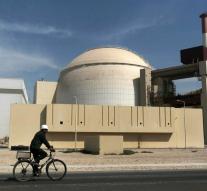 tehran - The Iranian parliament has conditionally approved the agreement with six world powers and the EU over the nuclear program of Iran. That the Iranian state news agency IRNA reported Tuesday .

The parliament has however stipulated that international inspectors have limited access to military complexes. The Agreement states that Iran's nuclear program will reduce. In exchange, international sanctions lifted against the country.