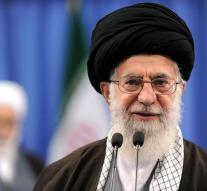 tehran - The spiritual leader of Shiite Iran, Ayatollah Ali Khamenei, on Monday fiercely lashed out at Sunni family that Saudi Arabia and there reigns situated holy places. Khamenei said the Saudis disbelievers with a very sensitive nature. The Islamic world would be better off in his administration of the holy places in Mecca and Medina to true Muslims to trust.

The ayatollah spoke Monday on the occasion of the hajj, the pilgrimage to Mecca. That Islamic ritual starts Saturday and lasts for five days. Khamenei also pointed to the disaster that has occurred during the hajj in September last year in Mina, located next to Mecca. More than 2,000 people were killed in a chaotic throng that had arisen.

Iran and Saudi Arabia have diplomatic relations broken early this year. There can be no Iranians this year to the hajj.