Home / World / 'Iran is building missiles in Syria and Lebanon' 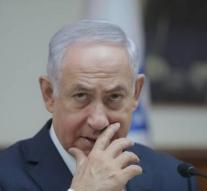 jerusalem - Iran is building installations for the production of advanced missiles in Syria and Lebanon. Israeli Prime Minister Benjamin Netanyahu is convinced that the missiles are intended for attacks on his country.

At the beginning of a meeting with UN boss Antonio Guterres, Netanyahu Iran accused Syria of being used as a 'military waste base as part of its declared purpose to eradicate Israel. '

An Israeli television channel earlier this month showed satellite images of one of the alleged Iranian installations in Syria. Channel Channel 2 claimed that it was about pictures of a complex that is being built at the coastal town of Baniyas. It would be intended for the production of long-range missiles.

Iran has not responded to the allegations yet. The country is one of the most important allies of Syrian President Bashar al-Assad. Netanyahu warned last week that Israel is willing to act unilaterally in order to prevent further expansion of Iran's military presence in Syria.

The Israeli government fears the consequences of a possible military victory of Assad in the Syrian civil war. In such a case, a permanent Iranian garrison could sometimes be left in neighboring Syria, thought of Jerusalem.