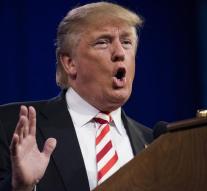 teheran - Iran finds the compassion of US President Donald Trump disgusting. This said Iran's foreign minister Javad Zarif, Thursday. Trump was allowed to pray for the victims of the two terrorist attacks on Wednesday in Tehran, causing thirteen deaths.

Trump added that 'states that support terrorism are at risk of becoming the victim of the evil they breed. 'Washington has blamed Tehran for years because the regime is a sponsor of terrorism.

Javad Zarif pointed out that 'Islamic State terrorists' (IS) terrorists are supported by 'US customers.' 'The movement IS has claimed responsibility for the attacks in the capital of Shi'i Iran. The group threatened with more attacks on Shiite Iranians, reported the BBC on Thursday.