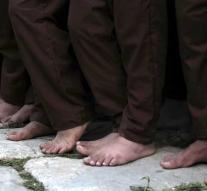 teheran - Eight members of the Islamic State who were convicted of committing attacks on the Iranian parliament and the mausoleum of Ayatollah Khomeini in June 2017 were executed on Saturday. The Tehran public prosecutor's office announced it on Saturday morning, reports the Iranian news agency Tasnim.

On June 7, 2017, IS fighters armed with grenades, bomb belts and machine guns, simultaneous attacks on the Iranian parliament building in the center of Tehran and on the mausoleum. Seventeen people were killed by the attacks and more than forty injured.

The five gunmen who were directly involved in the attacks were at that time killed by the security forces.